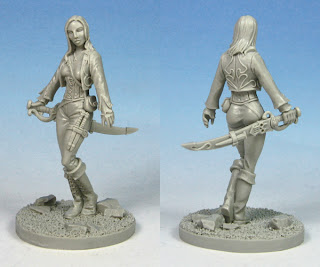 It has been quite a time since I talked about sculpting in any kind of detail but decided that I had something I'd like to talk about. So, today's topic is sculpting women. This will be more about the broad nature of doing so rather than an instructional piece.

I've been a pro sculptor for just over twelve years now and have specialised in sculpting women for most of that time. It's generally what I bring to the table and, during my freelance years it was by far the lion's share of what I was asked to sculpt, mainly because there really aren't that many sculptors out there who can convincingly sculpt women and those guys tend to be very busy people. The best out there, in my opinion would be Kev White and Juan Diaz. Both incredibly adept at rendering the female form. I consider myself to be pretty good too but those two I feel are the masters within our industry.

So, what's the best advice I can give in approaching a female sculpt? Well, first up I have to draw a bit of a line in the sand. I'm talking about sculpting women in 28mm and thereabouts and it'll be far from reality. In the real world, femininity is a complicated affair without a whole lot of rules. Like most in life, what works works and what doesn't probably does for someone else. But, in 28mm it's much easier to have harder rules. I have a rule that I put above all others for female minis and, in my opinion, it's where many sculptors fall down and miss the mark...

... femininity is in the hips!

There's a tendency amongst many sculptors to approach sculpting a woman in the same way as a man but to keep the figure skinnier and give it boobs. Frankly, you should be able to sculpt a flat chested female figure and still have it look female or you aren't getting it right and the breasts wont make it right. This often compounds by the sculptor making the breasts larger in an attempt to make the figure more feminine and it just gets comical or grotesque. No, the breasts aren't the point (err... so to speak), it's hips and bums where you'll make a female figure. I often surprise other sculptors when I tell them that I start my sculpture with the bum (male or female). I always sculpt torso first and the bum is the first putty to go on.

At an armature level, keep the hips wide and don't be scared to put a little meat on the thighs upon bulking out.

Keep a smooth but deep curve at the small of the back, it accentuates the bum and gives an elegant quality to the profile of the figure.

Flat belly? Not so fast. Just as you deepen the curve of the back you should let there be a gentle curve to the belly.

So then, I said not to use the breasts as a way to make the figure feminine but obviously they need to be sculpted right as well. The biggest mistake made other than oversizing in an attempt to make the figure more female would be in their positioning on the torso. They're lower than expected. I see many figures where the breasts emanate from the collar bone. Make sure there is a significant gap between the collar bone and the top of the breast.

And so to faces. Almost a topic in itself but I will do the quick version here. As with body shapes there is an idealisation that is generally required at this scale. It's very easy to sculpt an accurate version of a beautiful real woman and have it look rather masculine at 28mm. The nuances tend to get lost and the femininity with it.

Pointy chin! Keep the chin narrow. Woman can have quite wide jaws and still be very feminine but at this scale it's tough to make it work.

Narrow mouth and keep it low on the face. A wide mouth is very difficult to pull off on a female mini so keep it narrow. I tend towards a full but quite narrow lower lip and not so much sculpting the upper lip as tilting the gap of the mouth upwards around 45 degrees and shaping the edge.

Keep the eyes nicely defined and probably avoid lower eyelids (not a hard rule but usually better without).

When it comes to nasolabial folds on a female face I either avoid or try to keep them subtle.

Above all when you are sculpting women everything seems to be elegant curves that run into one another whether it be the body or the face.

Remember, you can often get away with anatomical murder when sculpting a bloke but it's easy to get a female figure wrong (I'm not going to pretend that I've never got it wrong).

Haven't sculpted my traditional birthday mini this year... hmm... wonder what it should be?
Posted by Steve Buddle at 11:28 10 comments:

Okay, about time for another blog post I feel (okay, overdue I'll admit).

When John gave me notes on his painting for my last post he also talked a little about basing. I decided his thoughts would be more appropriate for their own post though I'm also going to touch a little on my own basing technique...

First up, basing thoughts from Mr Blanchitsu himself. Fundamentally John sees his figures as gaming pieces, despite the level of work, and thus he doesn't like to go overboard on his bases. He doesn't like them too elaborate or too high and refers to it as a frame for the mini and also remarking that he dislikes the big guilded frames often found surrounding paintings in galleries. He finds them disrespectful to the artist. Frames should not be noticed, they are not in competition with the artist just as the base should not be in competition with the figure. Consider the figure moving through a grim futuristic landscape, not stuck to 10 tons of wreckage every step. 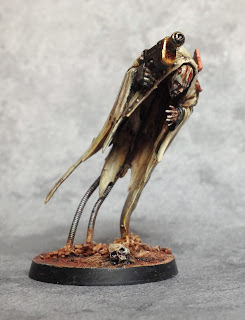 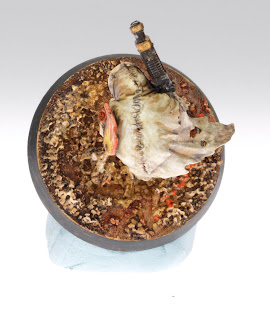 As well as regular sand, John also uses Bicarbonate of Soda as basing material which is a lot finer. Looking at his figures it gives just enough texture to pick up the paintbrush strokes without building things up too much. The different grades of sand work nicely to break up the groundwork. Though at pains to not go too nuts over his bases I'm sure John doesn't want them to be dull. A little interest on the base goes a long way... be it a skull or some discarded remnant of tech.

I rather like painting bases on my own figures though I have a slightly unusual take on things. Painting the base is my first step in painting rather than the usual last one. I find if I paint the base last it can become a bit of an afterthought and so I like to 'set the scene' right at the start. The only real part I don't do is add static grass (or tufts) as I like to varnish figures and it's easier to add this stuff afterwards. But whether an army figure or a grand Golden Demon entry, base is almost always first.

Now, I really need to get basing on my latest painting project, I'm well behind schedule...
Posted by Steve Buddle at 19:44 8 comments: