Detail versus simplicity... versus technology...

I've often talked, either on here or elsewhere, about my love of simple miniatures. One of the points that I've often put out there is that for wargaming all that detail is just making our lives difficult. In fact, painting modern minis en masse has been something of a pain. I felt the drive towards it was relentless and was largely due to people seduced by the idea of detailed minis and not really thinking of the consequences of painting them.

We have reached a point where minis are generally hyper-detailed and, for the most part it somewhat annoys me. Mostly because I like painting simple figures even when display painting. But lets go back to army painting. It's a pain. Or is it? The last few years have seen great advances in the quality and level of sculpting but has also brought with it new painting technology. We have Foundation Paints (and similar), Colour Primer sprays, Quickshade Dip and Washes that are formulated to just look good when slapped on. These aren't products designed especially for winning Golden Demon Awards or getting that ten thousand dollar prize at Crystal Brush. No, they're made for getting minis on the table and the dips and washes in particular are making life easier. I've been playing with washes and dips a lot over the last few months, just learning what they can do. Frankly we're at a point where you can pretty much basecoat a miniature quickly and then chuck some sort of wash over and with the minimal care and attention it looks good.

Such techniques are sometimes regarded as cheating. Newsflash, you can't cheat by making your life easier in this way. It's a fun hobby, not a way to torture yourself.

With a little thought you don't even need to do much in the way of highlighting. I've just photographed a couple of examples... 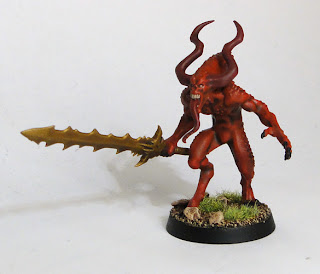 This Bloodletter photographed badly but I can assure you he looks really nice in real life. And that's with my eye as an experienced painter. The figure is sprayed with a red colour primer, the fins and horns painted Scab Red, nails are black and painted the sword gold. Bit of bleached bone on the teeth and eyes. And then Quickshade Strong Tone brushed over the whole figure. Leave for 24 hours and dullcoted. Did the base nicely and he looks nice. I'd have no shame in putting him on a tabletop. A five minute basecoat and then dipped. 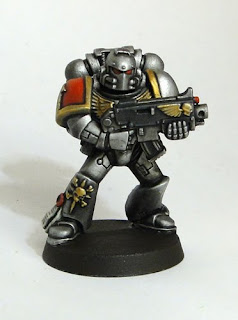 This guy photographed a lot better and he's a test for how I may paint a Grey Knight army. Painted the whole fig Mithril Silver, Gold bits painted, Blood Red on a few areas and Adeptus Battle Grey here and there. Little Boltgun Metal on the piping and metal sections of the Bolter. Less than ten minutes to basecoat. Then, flooded him with as much Badab Black Wash as possible. Left it to dry (took a while) and then a little clean up on the blood Red and Bleached Bone. Painted the base brown. Done. Can't wait to try it on a proper Grey Knight.

Neither of these figures will win me a Golden Demon but they're both way better than they should be for the few minutes they took to paint. Hell, I'd be pretty happy with that Grey Knight if he took a couple of hours.

Made possible through technology. The future is getting very interesting...
Posted by Steve Buddle at 18:50