Right, here is my bloody late first painting heroes article. Sorry, been a little under the weather this week (though I finished a very overdue paintjob on my fat zombie earlier that I will share soon).

Anyway, my first painter to talk about in this potential series of articles is Martin Footit. I'll make no secret of the fact that I like looking at the Eavy Metal style and most of my painting has been somewhere along those lines. Martin is certainly a GW style painter and cut his teeth with many years on the 'Eavy Metal team before moving on to being a sculptor and producing a great deal of rather nice and painter-friendly figures.

I'll take you through three of Martin's works and talk a little about why I'm generally in awe of his work. 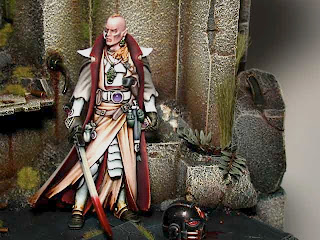 This is a closeup of Martin's subtle conversion of the Inquisitor scaled Eldar Ranger (that means it's 54mm(ish)). IT was probably seeing this figure that first really made me take note of Martin's work. I saw it at Games Day where it was entered in the Open and I got a good close look. Frankly I thought it was the best painting I'd ever seen. The painting is just immaculate here with perfect blends everywhere. What really grabbed me was the shading. All too often shading on a mini can get muddy but on this figure it was just so... vibrant but utterly appropriate. A classic lesson in the idea that it's not always the quality of paintjob but the choice of colours and the tones within those colours that can make a paintjob rise (though in this case, it was hardly making up for sloppy technique elsewhere). 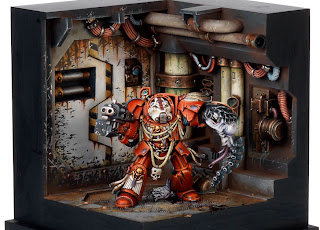 This Blood Angels Terminator was Martin's entry in the Open at GD last year and romped home to win the category. Again, it's not so much the colour scheme but the tones used in the colours that make the figure glow. All coupled with an exquisitely judged base/setting where everything works together to draw the eye in to the main figure without overwhelming it. Very easy to do with a large base like this. 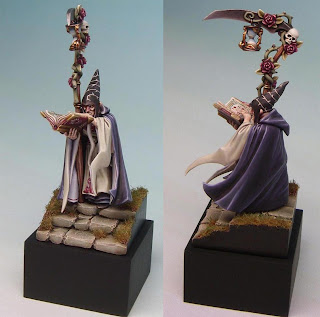 Again, this wizard brings us back to the core of what makes Martin's work so special. Check the perfectly chosen and applied shading on the off-white fabric but also the details of the pages of the book or the pink nose. And again we have the figure placed in a small setting which has become something of a Footit tradition. Often his bases are quite vast but here it's a lot more subtle.

The greatest praise I can give is that when I was painting my Greatsword for the last Golden Demon, the question I was generally asking myself is 'what would this figure look like painted and modelled by Martin. Now, I'm not quite as accomplished as him but it paid off pretty well with a silver demon so that ain't half bad...
Posted by Steve Buddle at 19:42