And here we have the midway point on my little list and the unveiling of sculptor number two. For my second choice I will be taking you to the largest miniatures company in the world and to the hallowed design studio of Games Workshop to talk of none other than Brian Nelson.

My first experience of Brian's work came in 1996 when I was working in the promotions department of Games Workshop's factory in Eastwood. I was working on the Citadel Journal at the time and a small bag of new Orc figures was delivered to Paul Sawyer, who was editor of the Journal at the time. Three Orc Big Uns from the new guy in town and they just screamed with raw energy but still neat, tidy and very paintable. I kept an eye on this guy... 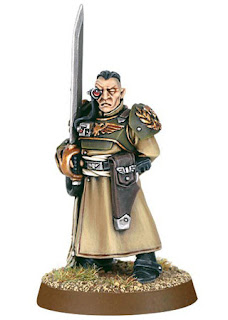 The above figure is typical of the work I truly admire from Brian. It's a very simple figure at it's heart but has all the character that you could wish for and still has the dramatic presence needed for a leader type. I painted this figure for Golden Demon a number of years ago with a minor conversion to make him a Commissar and he was just a dream to paint. One of my favourite miniatures of all time. You can see my paintjob on him on coolminiornot at this link. http://www.coolminiornot.com/32063 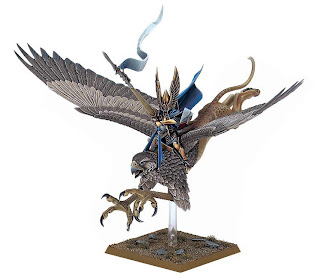 This figure is not actually one of my favourites of Brian's but it illustrates perfectly an area where his talent truly shines. Brian maybe the best in the world at designing plastic miniatures. The guy has proven time and time again an immense understanding of the processes of injection plastic tooling which is a truly arcane science. He is a master of the plastics puzzle in making figures that aren't compromised by the blank areas normally apparent on plastics due to the limitations of the moulding process. This Griffon is a snap together and the Griffon itself is just four pieces and I believe six overall which is just jawdropping for such a complex, three dimensional piece. Crazy, and my hat is permanently tipped in Brian's direction for such achievements. For more examples of his tooling genius look at the plastic Ogres (in particular the Leadbelchers), the Warhammer Giant or the pile of corpses on the Corpse Cart. 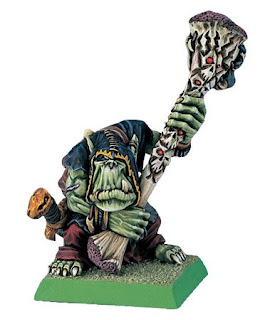 Now we take a jump back to his early work and this awesomely understated but powerful Orc Shaman. For my money one of the greatest Orc figures ever sculpted. I even managed to win Gold in 40K Single Figure way back in 1997 with a conversion of this figure. Again, there's no wasted motion here but the figure feels three dimensional and deeply characterful.

And, you know, Brian is versatile. I haven't even touched on his work on the Lord of the Rings license. Brian sculpted the original metal Fellowship of the Ring plus the Heroes of Helms Deep. Check out the original Theoden figure for one of the greatest likenesses I've ever seen (and check out Bilbo while you're at it). And look at the Bretonnian Sorceress with sword, or Archaon or... or... well I could go on forever.

Brian, for me, is the best sculptor in the world of figures in the gaming style rather than the boutique style (though his work on John Blanche's Femme Militant suggests he'd be brilliant there too) and he's the master of plastics work (I'm waiting to see more of Alex Hedstrom's work after Space Hulk showed an incredible talent there but I need more data).

People know I have quite old-school tastes and, for that reason, Brian is the sculptor I'd most like to have sculpting an entire range for me. Doesn't look likely though...
Posted by Steve Buddle at 11:41